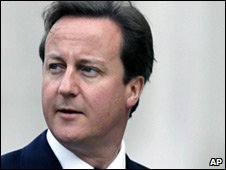 The latest political showdown on unfeasibly large parenting forum Mumsnet looks like delivering a points victory for Gordon Brown. Apparently David Cameron, who answered questions on a live web chat on the site today, was criticised by some posters as taking too long to answer. Brown apparently answered 30 questions in his hour on the site (could have been 31 if he’d taken the biscuit challenge) while the Tory leader managed just 16.

As the BBC reports here though – Cameron did have a few technical hitches.

He said that the BBC was “a vital part of broadcasting” it had also got “very overextended and the licence fee is high”.

The Tories have been talking for a while about cut backs of radio and specialist TV services like BBC4, reduction in number of BBC staff and salary for its stars and crucially rolling back some of the beeb’s Internet plans. Maybe he’ll even make you pay to view the BBC news site (in addition to the licence fee) – Rupert Murdoch would love that.

He also admitted to being a fan of the BBC political comedy series The Thick Of It, writing: “V funny… but only true about the other lot (not)”.