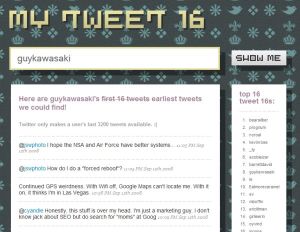 Remember what your first ever tweet was? Mine was at 4:57 PM Mar 9th 2007 when I informed the world I was listening to the Brian Jonestown Massacre. Riveting stuff eh? And I am sorry to say that my feed hasn’t got any more interesting since.

However if you can’t remember your first micro blog post, or you fancy seeing what others kicked off their Twitter life with there’s site called My Tweet 16 that brings back Twitter users’ first 16 posts from beyond the grave.

It is worth spending a few minutes seeing how crap many of your friends’ early tweets were, how they failed to use hash tags properly and generally talked about experiences with webcams which are probably best forgotten about.

In keeping with his reputation for delivering the most entertaining tweets in the Twitterverse, Twitter’s founder Ev Williams’ first tweets were corkers.

His first four were

From this we can denote that Twitter was nearly called Twttr (eek) and also that Ev set himself a low standard for his feed from day one. Then again if you are first on Twitter I guess you don’t have many followers to entertain…