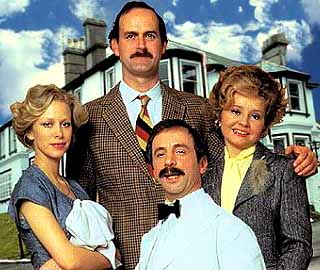 Fawlty Towers, the British sitcom starring John Cleese as a neurotic hotel manager, reaches its 30th anniversary this year. To celebrate, the complete two series are to be made available on iTunes.

Running for a mere 12 shows, Fawlty Towers cemented Cleese as a comedy genius in his own right beyond his already esteemed Monty Python career.

Each series will cost £7.99 a piece, with the BBC promising exclusive interviews with Basil Fawlty himself to follow shortly.

Fawlty Towers are will also hit shelves in DVD format, and will feature brand new audio commentaries from the cast.

Check out this classic clip from the show, along with an interview with John Cleese