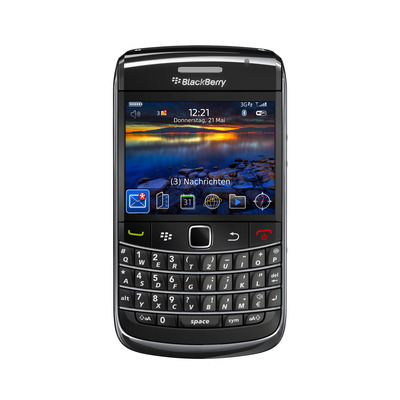 In an event at its European R&D facility in Bochum Germany today, RIM finally took the wraps off the much rumoured new BlackBerry Bold, writes Ashley Norris.

Billed as the Bold 9700, though we wonder if consumers might call it the Bold 2, the new device is smaller (109x60x14.1mm) and lighter (122g) than its predecessor and has undergone a few key cosmetic and technological changes.

In many ways the design of the handset is a more akin to the Blackberry Curve rather than the square-ish straight lines of the original Bold 9000. As well as being more curvaceous the 9700 is also slightly smaller, though the keyboard sand screen size aren’t too different from its predecessor.

The major ergonomic change is the inclusion of the trackpad which first debuted on the Blackberry 8250. This is a swipe style feature which makes it much quicker to cycle between the applications in the interface.

One of the major criticisms of the original Bold was its poor battery life. RIM has not only addressed this but its representatives are making a major feature of the new Bold’s battery life. The company claims that even with heavy usage it can run for three days without a recharge. Standby time is apparently a very impressive 16 days and RIM claims that the MP3 player will run for 33 hours before it runs out of juice.

RIM has also improved the quality of the camera with the new model sporting a 3.2 mega pixel snapper with improved lighting sensitivity. Other facilities include 3G, Wi-Fi, storage from a bundled two Gigabyte card, 480×360 65k 2.44inch screen, a camcorder, GPS, Bluetooth, BlackBerry Messenger and access to the BlackBerry app store

Unlike the recently launched Storm 2, which is a Vodafone exclusive in the UK, the Bold 9700 will be available in November from most UK networks with Vodafone and T-Mobile lined up to receive it first.