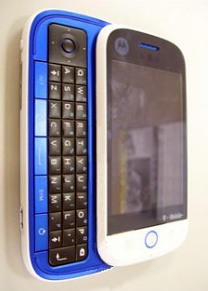 Today’s the day that Motorola nails its colours to the mast as the beleaguered US mobile manufacturer is expected to unveil a pair of mobiles that run Google’s Android operating system.

The announcement is imminent but as ever the internet is buzzing with leaked images and specs. This site claims the Motorola MB200 and MB300 will run Android, feature full QWERTY keyboards and also boast Wi-Fi, 3G and Bluetooth connectivity will also be present.

The MB300 is the higher-end model as it sports a five mega pixel camera, a faster processor and more internal memory. The Motorola MB200 apparently has a 320×480 resolution touch screen and a VGA camera.