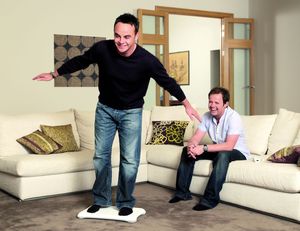 As if we don’t see them enough on our screens Ant and Dec have announced they are to front Nintendo’s biggest ever TV ad campaign in the run up to Christmas (I think that’s Ant doing his best aeroplane impression, but it could be the other one).

The pair will first hit our screens on October 16th where they’ll be meeting and challenging Nintendo fans and families from across the UK. Yes, the great British public will be given the opportunity to star alongside Ant and Dec, as the real stars of the ads, following a national recruitment campaign looking for genuine fans of Nintendo titles. Self confessed fans of Guitar Hero and their DS’s, Ant and Dec are no strangers to the world of gaming and admit to recently becoming obsessed with the Nintendo DS game Rhythm Paradise which they played throughout filming Britain’s Got Talent.

Says Ant: “I have always been a massive fan of Nintendo consoles. I loved my Nintendo 64 growing up. Mario Kart 64 was my favourite, it kept Dec and I entertained for hours during the PJ and Duncan years! Even today when I play Mario Kart on my Wii, I have a lucky steering wheel at home that’s only mine to use!!”

One thought on “Ant and Dec partner with Nintendo”