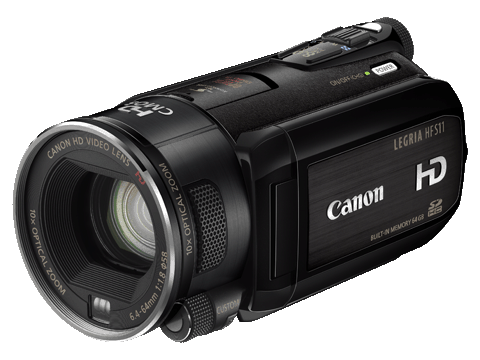 Canon’s LEGRIA HF S1O was one of the best received high definition, but still vaguely affordable, camcorders of recent times. Now it has put its successor in place n the guise of the LEGRIA HF S11 which is set to launch in September for a price which is yet to be fixed.

The new model has many of its predecessor’s facilities but, as you’d expect a raft of ‘enhancements’ too. The ones the company is crowing about most include new low-light shooting capabilities and an updated Dynamic Optical Image Stabiliser (OIS). Canon claims that the new OIS eliminates virtually all camera shake while filming and even lets people capture steady footage while walking or climbing.

The camera shoots at 1920×1080 Full HD video which it then archives to a 64Gig flash memory drive – apparently enough for up to two hours of HD footage or 24 hours on the lowest quality mode. It is also compatible with SDHC flash memory cards. Canon claims that saving to flash memory is not only faster than archiving to a hard disk but also flash uses less power thereby enhancing battery life.

Other facilities includes, 8 mega pixel still image capture, a range of both manual and automated controls and auto-gain limits for finding the right low level settings.