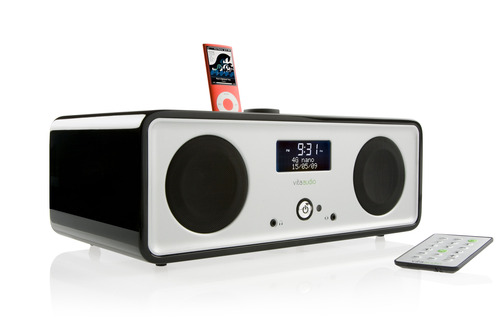 For a company that only launched in 2006, Vita Audio is making quite a name in the world of compact music systems.

We previewed the R2 back in 2007, and it went on to win a What Hi-Fi award later that year. The R2i is basically an upgrade to that system – this time complete with an iPod dock. That’s what the ‘i’ stands for, but you knew that already, right?

There’s no arguing that the system looks quite sexy, although the visual appearance is somewhat over-hyped by Vita Audio’s official description of the three versions available – “Rich Walnut Veneer”, “Dream White” and “Midnight Black” – wooden, white and black to you and me.

The specs are fairly standard for a music system such as this: 20-watts output and, as you’d expect, the unit is capable of DAB and FM radio as well as the, useless in the UK, DAB+ format. It also contains a line-in for an iPod that is pre-2004 or, heaven forbid, a portable music player that isn’t of the Apple variety.

There’s also two more, gold plated, phono sockets at the back which could be used to utilise the system in a recording setup, or could even be used as a line-in for a TV/DVD system.

One cool feature is that it will remember the volume settings when you are using the headphone socket. This is not only useful and a time-saver, it also has the potential for a hilarious practical joke – and subsequent visit to the ENT department at the hospital.

It’s available only at selected retailers. These retailers all happen to be what my mum calls, “the posh shops” – John Lewis, Selfridges, Harrods and so forth. This demonstrates that the R2i is not only a nice bit of kit, it may also enhance your suave reputation.

The R2i should retail at £279.99 for the walnut version and £20 more for the white and black versions.