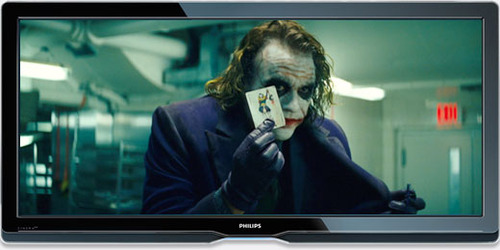 Should I buy it?: The short answer is yes. It doesn’t represent great value and the picture isn’t as perfect as the money sounds but it’s an awesome TV. You’re paying the extra for the unique design and the swaggering step of an early adopter.

This was one of those reviews that a blogger/journo gets very excited about. It’s not everyday you get to take a private, close-up look at a potential game-changer – particularly in the TV world.

The first thing you notice is that it’s big. It’s really big, and it looks even bigger because it’s such a long, narrow shape. Think carefully before you buy it because it takes a special room to accommodate it properly. A dedicated cinema room will probably be the home of the bulk of Philips Cinema 21:9s sold.

You get used to the shape in minutes and when you turn back to a standard widescreen, it’ll look boxy as hell.

The Cinema 21:9 is just that. It’s a cinema screen and once that’s in you head, it’s a very comfortable watch.

There’s only one way to test out a cinema screen and that’s with blockbuster Blu-rays. So, first up stuck on the beginning of I Am Legend for some fast paced action to test out the frame rate and response time and later the Dark Knight for the colour and light levels.

The level of detail of the picture you get is frightening. The expression of the Full HD resolution is unbelievably real, the edges of objects and actors so sharp that they almost seem to bend out at you as if in 3D. It’s apparently an optical illusion or so I hear.

The second point about it is that some films almost look like they’re home movies. Now, I know that sounds like a bad thing to say but it isn’t. It’s not a poor fuzzy picture quality I’m talking about. It’s a stripped down Hollywood laid bare feel. There’s little glossiness and softness left. Pictures are raw. Actors looks like real people in that way that Tyra Banks famously complained about High Definition. You can see every blemish and, on this TV, in such size. It takes a little getting used to but it’s part of the whole wonder of the experience.

The 200Hz frame rate and 1ms response time are perfect. Not a blur, ghost nor judder in sight and nor would you expect one on such a premium panel. The hunting scene at the beginning of I Am Legend was spot on. I was right into the fast-paced chase from start to finish.

Again, the Dark Knight was a joy to behold but there were two problems that arose when watching this film. The first is that the Dark Knight is shot in both 16:9 and true cinema 21:9 which meant that from scene to scene the Philips auto screen size sensor would flip in and out to adjust to the correct size.

The idea of the 21:9 is, of course, that you don’t get any black bars at the top and bottom of your picture. That’s fine when something’s shot in 21:9 but at other sizes, the sensor will fit the image to the screen sometimes with a very slight cropping of the image.

I didn’t find the cropping a problem with 16:9. You really don’t notice it, but it frustrates me to say that, at the time, I didn’t think to try it out with a normal 4:3 television broadcast.

I’d be disappointed if Philips hadn’t figured out an algorithm to make that work and, at the least, you can always watch TV without the sensor off and black bars to the left and right – big chunky ones might they be.

The other issue, and the reason it’s always worth testing with gothic look films, is the black levels. This is the one real thorn in the side of the 21:9. They’re not great. This isn’t an LED TV, it’s relatively tradiontal tube backlight technology and there is a degree of light spill when we’re talking about such big bulbs.

It’s not something you’d nornally have a problem with but in dark scenes, of which there are many in Batman films, the blacks tend to look a little unform and flat. You could see the folds on Comissioner Gordon’s dark suit on the nighttime roof tops when you know that they should be there. It’s a bit of a shame but it won’t ruin your experience.

The best, and most Philipsy, feature of this set is the Ambilight Spectra 3 system. For those unfamiliar, it’s a system of LEDs at the back of the panel that projects the colour of whatever it is you’re watching onto the wall behind. Philips says it extends the picture. I’m not sure about that but it is a really cool effect and I’d opt for a TV with an Ambilight if you can. It really brings a sense of atmosphere.

The anti-reflection glass and the eight-day EPG are worth a mention while we’re here. The former works. There’s not a lot more you can say about it. I was never aware of a reflection problem. No glare at all. The latter is smooth, clear and well implemented.

The whole menu system on the Cinema 21:9 is in line with the same house style of all Philips products. There’s a Symbiam 60ness about it. It’s straighfoward and easy to navigate around all the menus of the set and it’s largely icon based; on the friendly side but without going too far into the relams of cartoon. You’ve paid too much money for this to look childish.

The last point I’ll mention is the sound. Now, it’s unlikely that anyone buying this TV isn’t going to go the whole hog and invest some more cash in a proper home cinema set up, but if your amp goes on the fritz or your surround sound speakers pop, you’ll be perfectly happpy with what the Cinema 21:9 can offer while you get it all fixed. It’s got good clear top end and nice, rich, heart-pounding base.

There’s no two ways about it. The Philips Cinema 21:9 is a great TV. The picture is excellent apart from the blacks issue and if it weren’t for that I’d call it a must. All the same, what you’re buying into is something altogether unique. No one else you know is going to have anything like this, at least not for another year and half.

The time will come when more manufacturers make their own version of this orginal cinema shape and when that time comes there’ll be better panels and cheapers ones too. Philips themselves will doubtless improve on what they’ve already done. But until that time, you’re going to have to pay a premium for this luxury item and, for now, that premiums worth it – even if the picture does have its faults.