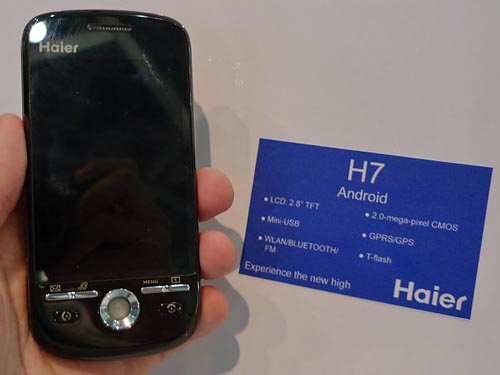 I’m not usually in the habit of reporting on Chinese phones but then this particular model, the Haier H7, is set to be launched in France in September, and if it’s going to France there’s a very good chance it’ll be all over Europe like a rash.

The H7 could be the fourth Android handset to hit UK shores after the G1, the Magic and the Samsung I7500 notwithstadning whatever else the likes of HTC, Sony Ericsson & co may have up their sleeves in the coming months.

It’s got a 2.8-inch touchscreen, a 2-megpixel CMOS sensored camera, connectivity via Wi-Fi and Bluetooth (no mention of 3G), FM radio, GPS and an on-board flashlight or what we know over here as a torch. It’ll also ship with Android 1.5 (Cupcake) and even 2.0 (Donut) if it’s availble by then.

It doesn’t sound particularly speccy but then perhaps it’s not supposed to be. The Haier H7 is only expected to retail for $150 (108€). Are we looking at the first mass market Android phone?