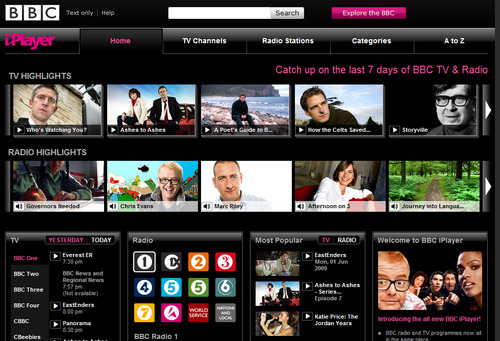 The BBC is in talks with Google to launch an international edition of the BBC iPlayer, supported by Google owned YouTube.

The sticking point seems to be the need to acquire international rights for the content shown on the UK iPlayer.

Separate negotiations are also in progress between the BBC’s commercial arm – BBC Worldwide and YouTube, with a view to making the BBC’s archive content, for which international rights have already been acquired, available on YouTube.

It is currently possible to watch some BBC content on YouTube but only in short format; trailers and clips as opposed to entire shows and episodes.

A BBC spokesperson said: “There are a significant number of obstacles to extending this commercially to other countries, including international rights clearance. These obstacles present significant difficulties and for this reason there are no firm plans for a specific international BBC iPlayer, but audiences can watch BBC content outside the UK through numerous BBC Worldwide content deals with online partners such as iTunes.”

The news of these negotiations might scupper talks designed to offer a consolidated VoD service for UK content if NewsCorp deems the international iPlayer a significant enough threat to it’s part owned US-based Hulu VoD.