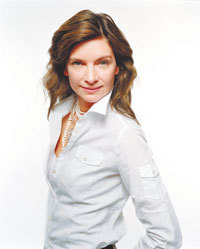 Usually the Sunday Times Rich List makes me green with envy at how much money the rich are making. Not so this year. The Top 1000 have lost 37 per cent of their wealth, down by an astonishing £155 billion between them – now that’s a lot.

Yet for tech companies it’s not all bad news. Eight of the top 100 rich kids under 30 made their money from tech and some of the fastest growing fortunes are online, including Natalie Massenet (pictured) who is the force behind Netaporter.com. Founders of internet gambling, price comparison websites and certain etailers feature particularly highly this year, in many cases because of fairly hefty valuations on their businesses.

25. John Caudwell (Mobile Phones) £1400 million
The richest tech-related person on the list, Caudwell – 56 – sold his mobile phone business in 2006 to a private equity firm, trousering about £1.24 billion. Still has a stake in Phones4U.

59. Sir Alan Sugar (Consumer Electronics) £730 million
Probably best known for looking grumpy and shouting ‘You’re Fired’ than anything else. But orginally made his fortune from Amstrad (receiving £36 million for his stake) and still has a holding in Viglen.

60. Russell de Leon and Ruth Parasol (Internet) £700million
They may have been forced to shut their American operations, but Party Gaming, now trading out of Gibraltar, is estimated to be worth a fortune. The husband and wife couple behind the operation have a stake worth £200 million in the business.

70. Sir Terry Matthews (Computers) £600 million
Made £600 million after selling Newbridge Networks to Alcatel some time ago, but most of his business these days is from his £125m golf resort in south Wales which will host the Ryder Cup next year.

77. Anurag Dikshit (Internet) £559 million
Left the board of internet poker website Party Gaming in 2006 but retains a stake in the business worth £216 million. Rest of wealth from past share sales.

79. Paul Sykes (Internet) £550 million
Sold Planet Online, once one of the biggest ISPs in the UK, to Energis. But also made a lot of cash from selling Meadowhall shopping centre in Sheffield

128. Peter and Denise Coates (Internet) £400 million
One of the few risers in the Top 1000, the father and daughter combination are the brains behind the Bet365 website. Profits more than doubled in 2008 to £30 million on revenue of £160 million.

135. Jan Mol (Computers) £390 million
Dutch computer entrepreneur sold his IT company Volmac and has invested in several internet firms run by his son Michael in Amsterdam.

178. Charles Dunstone (Mobile Phones) £300 million
Dunstone’s Carphone Warehouse may have been hit hard by the downturn, but he’s still worth a few quid, despite the Sunday Times estimating that he’s lost £600 million of his fortune in the last year.

218. Niklas Zennstrom (Internet) £260 million
The London-based Swede sold Skype to eBay in 2005 for a stomping £1.5 billion (his share was worth £225 million) and is now running video streaming service Joost.

222. Michael and Xochi Birch (Internet) £250 million
Sold Bebo to AOL for £418 million in 2008 (70 per cent owned by the couple and his brother). Michael Birch’s latest venture is multimedia dictionary Wordia.

243. Vikrant Bhargava (Internet Gambling) £230 million
Yet another internet gambling millionaire, Bhargava made his fortune from the 2005 floatation of Party Gaming

507. Herman Hauser (Computers) £107 million
Made his first £100 million with Acorn Computers. Has since gone on to back hi-tech firms through his venture capital business, Amadeus Capital Partners.

566. Andrew and Paul Gower (Computer games) £99 million
The owners of Jagex, the Cambridge firm behind online game Runescape and others.

600. Julian and Marc Worth (Internet) £90 million
Brothers sold their trendspotting website, Worth Global Style Network, to EMAP for £140 million.

Natalie Massenet (Online fashion) £54 million
With a fortune of just £54million, Massenet – the founder of online fashion retailer NetAPorter – just misses out on the Top 1000 list though she is 98 in the 100 Wealthiest Women chart.