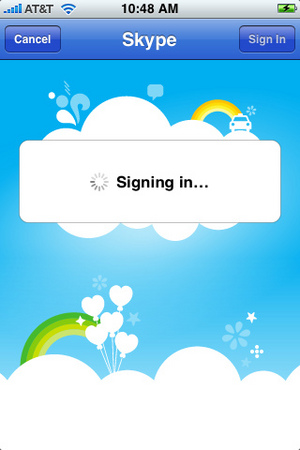 Skype will be available to use on the iPhone from tomorrow. The news was predicted last week for the hugely popular VoIP service to hit Apple’s handset but the added bonus for many is that Skype will also be out on the BlackBerry too as of May.

“The No. 1 request we get from customers is to make Skype available on iPhone. There’s a pent-up demand,” said Skype Chief Operating Officer Scott Durchslag.

The service will also be available on the iPod Touch, which has been fitted with a microphone as of its 2008 incarnation, and users will be able to integrate their Skype contacts list with the numbers on their phones.

Video calls will not be possible at the moment but it’s something that Skype is seriously considering with the only caveat on quality. However, CCS analyst Ben Wood believes it would be a incredibly important step if it did come about. He said:

“I’m firmly convinced that if Skype could find a way to bridge all those cellphone cameras and laptop cameras it might kick start a video telephony opportunity.”