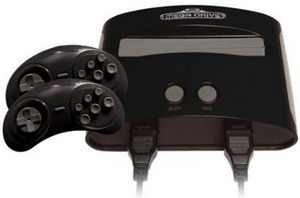 If you’re one of those people who believe that video gaming passed its best the second we left the 16-bit era, then be ready to welcome a new console underneath your television set that will make the Wii’s graphics look cutting edge. Next month, Blaze – who brought us a handheld Mega Drive last year – will be bringing us a region free full sized version to co-exist happily next to your modern console of choice.

In fact, it has managed to outdo the original (which is just as well, given it’s had over 20 years to perfect the formula) by including 15 Sega licensed games in the system, as well as playing any old Mega Drive cartridges you haven’t had the heart to throw out. The built in games include Sonic and Knuckles, Golden Axe, Columns and Alex Kidd.

It comes with two pads for multiplayer gaming out of the box, and the website notes it’s just 45 days away with a 24th April release date. It’s got a not-unreasonable price tag of £39.99 on it, but if you just want a best of retro collection, you may be better served with the recently released Sega Mega Drive: Ultimate Collection on PS3 or Xbox 360. When they do the same thing for the Dreamcast, you can colour me very much interested.