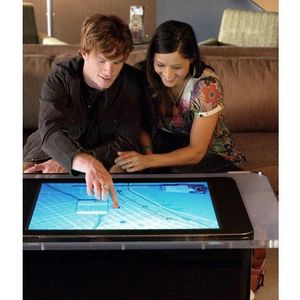 You there! Yes you! Do you want your relationship made closer with the warm artificial glow of a touch screen tablet in your living room like the catalogue couple to the right? Well, Microsoft’s £10,000 Surface is for you!

But I know what you’re thinking. You want to get even closer to the little lady with an additional projector layer. Don’t worry friend, Microsoft has your back – Surface 2 is in the works, but you’ll have to wait two to three years to get the extra closeness you crave.

Actually, the press image above is misleading a number of levels – not just in the amount of joy it will bring the average couple. Y’see, it’s mainly designed with tourism, enterprise and public facing solutions in mind. That’s where the second iteration will come in handy – a tourist map could add a satellite layer, for example, or more text information on top of points of interest. All very useful, and a big improvement on the original which relied on just five internal cameras to provide its touch interface.

All of this has been revealed at SXSW, where a developer from Phenomblue has said it’s in the development stage and still a long way from commercialising. Which is just as well really, because all of you who rushed out and paid the £10,000 when we reported it last week would be mightily peeved if you needed to upgrade so soon.