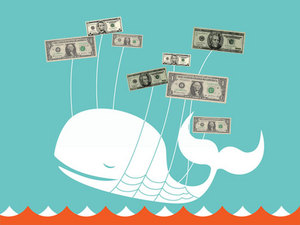 Twitter has announced that it’s going to start charging cold, hard cash to use the service. If you haven’t already read the news this morning, then you might well be mid heart attack right now, so please read the next sentence before you clutch you upper arm and fall to the floor. They’re only talking about a paid-for pro service alternative and there will always be a free option. That’s what they’re saying, anyway.

Now, nobody’s quite sure how they’ll be running this pro service and, to be straight with you, I’m not sure it’s going to be enough. So, I’ve devised five ways in which Twitter can make money out of regular users like you and me, just don’t tell them about it or it might actually happen – in which case, I’d like a free account and a cut of the profits, Twitter, or else I’ll get my non-existent lawyer on you.

Come on, we all know it. Companies – whether they be big faceless corporations, media publishers and, yes, blogs of a non-personal nature as well – should pay. It’s a world of free, instant publicity and it’s very, very effective.

It’s rather harsh on the likes of small blogs and start ups trying to get a leg up in the world but it wouldn’t have to be a lot of cash. Gumtree doesn’t let companies post job ads for free any more and I could see some sort of £25 for the year price tag without too many businesses opting out after initial promises of outrage.

It could be a tricky system to police but Twitter would eventually get round to vetting accounts and I’m sure the threat of banning would be enough to get people to toe the line.

If companies are going to pay, then those who plough their RSS feeds straight into their accounts must certainly fork out too. It’d be one thing if it were a selection of the best stories and posts chosen with the love, care and a human touch but if you’re going to get a robot to spam out every word that you spout then, my friend, you must pay.

I’d be quite happy for people to get around this by manually inputting each link and tweeting it off but that takes a bit more time and inconvenience and I reckon it might just be enough to make people reach into the coffers for another fiver a year.

3.) People who go over their daily usage must pay!

Currently, there is one very good way of dealing with someone who overtweets – stop following them, and believe me, I do. It’s empowering, isn’t it? But how much more satisfying would it be to know that they were actually having to pay for their verbal pollution?

I’m gonna do me some emails and Today really is one of those days… – entertaining stuff, I’m sure we’ll all agree.

Of course, there is one way around this for the Twitter addict – multiple accounts, which leads me nicely onto my next point…

There’s not a lot of reason to have a second account unless one of them is for some kind of commercial use in which case you should be paying anyway. There could be some kind of system whereby account one is free, number two is a £2.50 and the next a fiver and so on until either we’ve staunched an individual’s flow of diarrhoea or those unable to stop are, at least, supporting the whole service anyway.

N.B. The only exception to this rule should be the comedy accounts such as Street Fighter characters, starship captains, Dark Lords of the Sith and people’s anatomy.

This is, I think, the best of the five ideas for Twitter to make some cash. It could be a little off-putting to set up but it’s a stroke of genius.

Anyone who goes over the 140 per tweet limit should pay 1p for every extra character they use. On the one hand, this goes against the whole ethos of Twitter but then, at least, those transgressing the rules would be paying to do so.

Let’s say, Twitter has your credit card details or sends you a bill at the end of each month which you can pay automatically through PayPal or something. When you write a long Tweet, it logs how many you go over and how much you owe

You do, of course, have the choice to go back and edit your tweet to get it to fit in but 95% of people are far too precious about their words to edit their copy rather than spend a 2p or so. It doesn’t cost an individual much but if every Twitter user did it just once by one character, then that would be £3,460. (Figures of total Twitter users are based on the number of followers of Stephen Fry, as everyone on Twitter follows Stephen Fry)

These are, of course, just a few ideas and I doubt any will actually happen. Twitter has, so far, been very careful about upsetting it’s community. Interestingly, though, with two accounts, a Twitterfeed and a company account to our name, Tech Digest would certainly be coughing up the bucks.