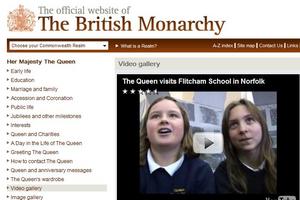 So Katie Lee and I found ourselves at Buck House this lunchtime with Her Maj – as you do. The event? The relaunch of www.royal.gov.uk.

First launched in 1997, the site has been given something of a facelift with brand spanking new features such as high definition virtual tours of all the royal palaces including Buckingham Palace and Windsor Castle. How quickly they will load up once everyone is online is another matter.

Her Majesty was there and on fine form as she opened the site with a click of a button on a remote control appropriately enough. Speaking to her afterwards, she confessed she didn’t use the internet herself but had great admiratin for Tim Berners Lee who, of course, brought us the web. And she also dissed old media saying that “they just print a load of old rubbish.” Go Queenie.