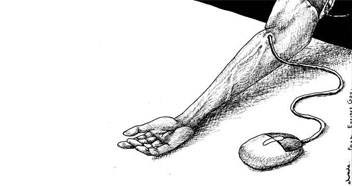 Do the Daily Mail and its online counterpart write these stories to create outrage or just as a way of wowing with sensationalist nonsense? Perhaps it doesn’t matter, because it must work both ways. On the one hand, these kinds of stories sell papers/attract traffic and on the other hand it brings them publicity. Well, I’m sitting here writing about it, aren’t I?

So, today’s pile of old toot is about the possible link between social networking and cancer. Oh really.

Now, I feel rather sorry for psychologist Dr Aric Sigman who mainly talks about how using Facebook and MySpace causes a decrease in face-to-face social interaction and how that might lead to socio-psychological issues.

To give the doctor an incredibly generous benefit of the doubt, it might. Yes, it probably has led to less face-to-face interaction, the internet and technology may increase this further and, on the surface, I can see why Dr Sigman might have come to the conclusion that it would cause the reduction of important hormones such what the doc calls the “cuddle chemical”, oxytocin.

Sadly, it’s a load of rubbish on so many levels; so many that it’s very hard for me to get them down in any order without exploding but I’ll give it my best shot:

The doc and others may argue that virtual and actual worlds are different but I, and anyone who regularly uses the net, would probably disagree. I’ve had plenty of very real physical and chemical responses to my interactions with virtual worlds. I remember playing an MMORPG and blushing from my head to my toes when I perpetrated a social faux pas just as much as I would have if it had happened in the real world.

People experience very real feelings of love online, as grown and initiated in the virtual world, with absolutely no physical contact. You tell them they’ve haven’t got the same hormones rushing around their bodies.

You can bet your bottom dollar that the chemicals that might normally require physical contact for release will work just the same without that physical component. The stimuli and mechanisms to make it happen will just become more sensitive.

If your body has a reserve of hormones, trust me, it’ll get round to releasing them somehow, and if you really want to take this one further, then what the hell is the difference between “real world” stimulations the virtual world, anyway? Brain in a jar debate, anyone?

Let’s assume that physical isolation is the same as virtual isolation here for a second – which I don’t think it necessarily is. What I mean is to suggest that interacting with people online doesn’t count for anything and is not considered as social company. I don’t think that this is true but let’s try and help out the case for the prosecution.

Now, one’s behaviour – whether chemicals of the interior, thoughts, attitudes, moods, or physical actions – is a result of the combination of our genes and their interaction with the environment. Dr Sigman has got that one right.

So, what the doc then says is that if this increased apparent isolation occurs, then what we’re looking at is a different environment for our genes to interact with and so lots of different “unplanned” behaviours as far as nature goes; an alternative firing of our genes is what the doctor is talking about and then somehow decides that that will come in the form of heart disease and cancer.

First, as stated above, there’s no reason to say that our chemical composition would be changed anyway, despite this “isolation”, but, second, even if it did, who could possibly say that the effects would be negative, let alone as bad as cancer? That’s just guesswork at its most ridiculous.

…so what? So what if this makes a big change to the way our genes respond? Living things have been evolving for millions of years and the new guidelines for selection could be based around using a virtual world much more than we ever have done.

We’ve already shifted the selection pressure significantly away from the physical world of the hunter gatherer and towards abstractions like professional success, money and fame which are now the kinds of behaviours that would attract a mate in modern society. That’s just part of the growth of our culture and it’s pathetic to resort to scaring the world with stories of cancer and isolation just because people are uncertain about an ever-changing future.

Life, time, behaviour; everything organic grows and changes and there’s no reason to try to stop it.

My last point is a bit of a side issue really but they take a bit of a cheap shot in this piece which is supposedly there to highlight the differences between the virtual and physical worlds. They look at the failures of teaching children through video broadcasts or DVDs rather than in face-to-face real life; i.e. the fact that it doesn’t work so well.

Well, I’m not surprised. If the teacher isn’t able to interact with the pupil or the pupil with the teacher then it couldn’t possibly be as effective as face-to-face education but that’s no proof of the virtual world being a less viable or effective way of leading your life. Try studies where lessons are webcast live with two-way connectivity and then we’re talking – well, so long as the teachers keep an eye on whether the kids are paying attention and can meat out appropriate virtual punishment when they’re staring off out the window.

Anyway, enough of this. My finger tapping and throbbing temples aren’t worth the newspaper print this story is written on – virtual or otherwise.

UPDATE: Shame upon shame, the BBC has taken it on. There’s no counter-opinion offered and the only sign that they may not agree are the inverted commas in the header. And this is where my licence fee money goes to etc, etc.

One thought on “Daily Mail Online headline: How using Facebook could raise your risk of cancer”