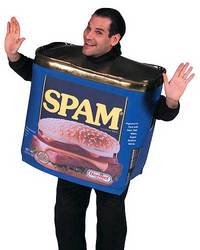 Apparently looking down on the proletariat from your ivory tower isn’t quite enough for one group of academics at some American universities – they wanted some cash too, so set up a spam network to make a quick buck. Of course, being academics, they couldn’t help but turn it into a “research study” to see if they could find out how much money you can make from spam e-mail.

It turns out that the general public aren’t quite as stupid as spammers would like – it turns out that they only got one response for every 12.5 million e-mails sent out – and after being professional spammers for 26 days, having sent 350 million e-mails, they’d only made 28 “sales” of their fake “[email protected] MEDS!!!”. This is a success rate of 0.00001%, compared to 2.15% for normal junk mail companies. So the lesson here seems to be to post junk to people rather than e-mail, kids.

To find this out, they actually had to be a bit like Louis Theroux, and actually become spammers. They hijacked part of the “Storm” network that uses hijacked home PCs to send out Spam to operate, for their own ruse. Try figuring out the morality in that. The researchers reckon that if their fake-fake pharmacy website were really selling herbal pills, rather than deliberately showing an “error” when the user filled in their credit card details, they could have made around $100 a day – which if they’d used the whole Storm network of a million unsuspecting computers, they could have made maybe $7000 a day. Scaled up even further, this would put the spammers on earning around $1.28 million a year – I wouldn’t grumble if I were earning that.

I’m not sure if spamming is a crime, so can’t say that it goes to show that crime pays, but it seems pretty clear that being a spamming wanker clearly does.

Related Posts: How much spam you get depends on your name | Meet the UK’s most spammed person