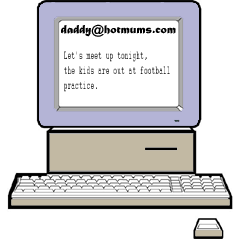 Children in Sweden are embarrassed and concerned about what their parents get up to on the Internet, according to a report from the Barnens Rätt i Samhället (Children’s Rights in Society) organisation.

“I read his MSN conversation log. I was just curious. And then I saw that he was talking to, like, young girls. And the disgusting part is that he’s 53!” said one teenage boy.

A 13-year-old girl said that her mum was so engrossed in World of Warcraft that she rarely spent any time with her, and when she’s away from the computer “she’s like a lost soul. She just looks straight ahead and says nothing.”

Yet another teenage girl reports that her mum sits half-naked in front of the PC, posting photos of herself online.

Nearly 2,000 cases were reported last year, with 100 of those kids seriously concerned about their parents behaviour. It seems like children aren’t the only ones who need Internet filtering software.