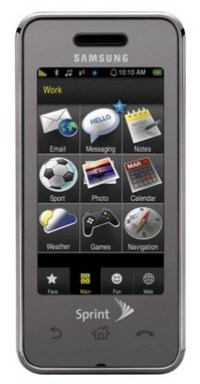 Yes, the Samsung Instinct 3G touchscreen phone is being sold by Sprint at just $199.99 to match the $199 iPhone 3G on AT&T but it’s all swings, roundabouts, merry-go-rounds, and adventure playgrounds if you ask me.

Firstly, the Instinct will work out at $199.99 only after you’ve paid $449.99 upfront with a $150 instant rebate and then the other $100 through the post. Can’t they just cut the crap and charge the right price first time?

Secondly, the deal will include having to sign up to the Sprint Everything plan to the tune of $99.99/month. Sure that includes all your minutes, texts and data charges but that ain’t cheap, more expensive in fact than AT&T’s iPhone 3G offer.

However, with AT&T you pay a total of $74/month for your iPhone 3G and you only get 450 minutes and 200 texts. You can add more on but chances are it’ll add up to something like $99.99/month. So, what it seems to come down to yet again is which phone do you prefer?

If it makes any difference, the Instinct is out on 20th, June marginally earlier than the iPhone 3G. It doesn’t, though, does it?