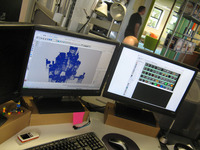 We were invited to the northern end of England a couple of weeks back, to the UK development HOTBED that is TT Games.

Formerly known as Traveller’s Tales, the Knutsford-based video game creator is riding high at the moment, thanks to its production of the LEGO Star Wars series and the chart-topping LEGO Indiana Jones. Everyone loves a bit of TT right now.

So, to celebrate the imminent release of The Chronicles of Narnia: Prince Caspian, Tech Digest received an invite and complimentary train ticket to see the game-making process first-hand. The train conductor sounded like Robbie Williams. But it probably wasn’t.

Anyway, making a game is harder than you’d imagine. It certainly involves more people than you’d imagine – an office space the size of a large SPAR or even a small Tesco was full of men and computers, all working on just the one game.

Being based on a film helps the design team, but also presents a few problems. Sometimes they’re sent the original Maya (3D graphics program) files the film-makers used, and are left to downscale them to Xbox 360 and PS3 resolution – then further reduce the detail for Wii and PlayStation2. 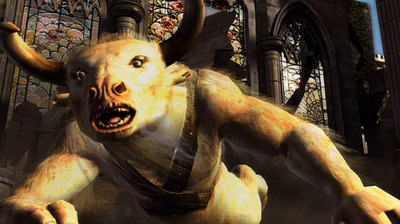 Often, though, they’re left up design creek, stuck recreating scenes and environments only seen fleetingly – or not at all – in the film. Rooms need to be padded out and furnished, rooftops organised, castle walls pointed the right way.

The film shows the massive castle from a few wide, outside shots – the game takes you through it. So a lot of corners and rooms need filling in. Some elements even have to be completely redesigned to help make the game playable – a room the size of a cupboard isn’t much use in a video game with four players hacking and slashing their way around.

In order to do all this properly, lead artist Guy requires a staggering THREE PC monitors. Here they all are. It’s one hell of a tactical array. 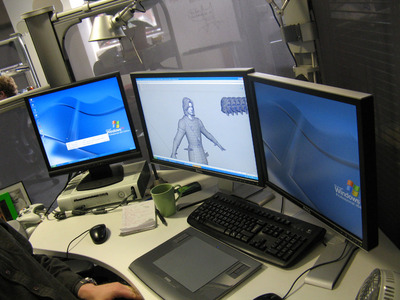 Guy told us about creating the characters. When building game versions of real people he has to get them approved. The adult actors are usually fine with it – it’s the parents of child actors that are the difficult ones.

“They tend to complain if the portrayal of their loved-one isn’t what they were expecting” he told us, without his teeth being visibly gritted. Guy’s been handling the creation of Prince Caspian’s 90-odd characters – hence the requirement for three screens. I never actually saw him use all three at once during my visit, though. I suspect at least one of them is just for show.

Here’s Simon James, the lead animator and motion capture man responsible for making sure the hacking and slashing looks good. He jumped around on our command while wearing the motion capture costume, showing us how T2 captures movement in real time. He probably would’ve danced for us, had we asked. 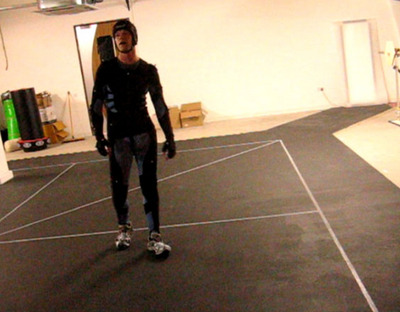 The motion-capture man was a great bloke. You have to be a bit ballsy if you spend your working day wearing a skin-tight rubber costume and he was awesomely ballsy.

He took us through the motion-capturing process required to make the in-game characters move. When your in-game man falls over, the movement comes from Simon actually falling over. He may have even hurt himself so that YOU feel more involved in the game.

And when your in-game man lifts something, that’s Simon lifting a bag of rubbish over his head in the studio so it looks convincing. The opening of gates was recreated by Simon pushing a plank up a pillar, there’s even a wooden horse made out of a barrell in the studio to make sure the sword of a rider doesn’t cut through your in-game horse’s body and horrify watching small children.

Scenes involving dwarves required the getting and recording of a proper little person. One woman who has the ability to run around on all-fours like a monkey was brought into the studio, especially, just so they could get some monkey-like monster movements recorded without the RSPCA having to get involved.

It is terribly in-depth. Simon reckons he did around 1600 takes in the studio, just to get things looking and moving right in Prince Caspian. That’s a lot of hours suffering in a rubber costume. You’d better be grateful.

Prince Caspian is out this Friday, for Xbox 360, PS3, Wii, DS, PC and even the good old PlayStation2.