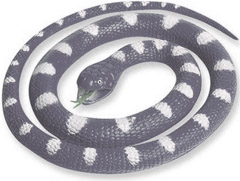 Forget snakes on a plane, for soon there could be snakes in your drains – robotic snakes, that is, which can climb vertical pipes, cleaning them or looking for leaks.

Norwegian scientists are working on a one-and-a-half metre long aluminium-clad robot is constructed with multiple joints, plastic wheels, and a camera, and is programmed with algorithms that tell it how to navigate pipework, and what tasks to carry out while in there.

It can climb pipes as small as 20cms in diameter by either twisting itself upwards by pushing itself against the pipe wall, or attaching itself and sliding up like… well, like a snake.

Its developers hope to have a fully working prototype ready for testing by the end of the year.