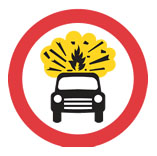 In the quest to loosen the oily grip from the testicles of America, US car manufacturers are investing a great deal of time and money into alternative fuels. However, it seems these new methods are not always as safe as they seem to be after a hybrid vehicle exploded in testing last month.

Now, before anyone out there reading this in their hydrogen cell car starts freaking out, the motor in question was a petrol/hydrogen hybrid Toyota Prius that had been retro-fitted with a li-ion rechargeable battery system and technology allowing the user to plug the vehicle directly into the household mains. These cars are not available for purchase and had been adapted by a third party manufacturer.

The poor old driver of the said Prius caught sight of the back seats on fire in his rear view, pulled over in minus three seconds and fled the scene before the whole shebang sheboomed. Interestingly enough, when they examined the wreckage, the retro-fitted electrical parts did not appear to be responsible but it was the hydrogen cell that had caught fire.

Once again, though, before anyone starts to panic, that’s not to say that it wasn’t the addition of the plug-in technology that destabilised the h-cell. As it stands, normal hybrid and electrical cars on the market are perfectly safe, but I wouldn’t go retro-fitting anything after purchase if I were you. That’s one hack to avoid.

Related posts: Doorless solar car | How to economise your car