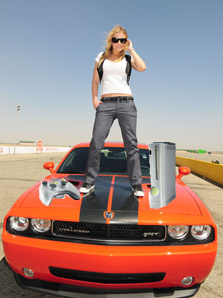 When we broke the news about Peekaboo Pole Dancing launching a Wii game, we mentioned that Carmen Electra was already a fan of the portable dance poles, however it seems Carmen and her ‘Electra Poles’ might actually be launching on the Xbox 360 instead.

Speaking to MTV, Simon Kay from Peekaboo revealed “the biggest issue with the whole thing is Nintendo’s approval, we’re not going to get Nintendo to approve a Carmen Electra-based Wii game, not in near future at least.” Owing to the Wii’s ‘family-friendly’ reputation, they’re being forced to look at alternatives, such as the Xbox 360, which “could be edgier” according to Kay.

The rumours surrounding the 360 and a motion-controlled peripheral have certainly heated up in recent times, with Peekaboo intending on launching a game which will call upon the use of such technology. Up until now, that’s only Nintendo, but fingers crossed the old adage of ‘no smoke without fire’ proves true, as Peekaboo wants the game on the market by the end of 2009.