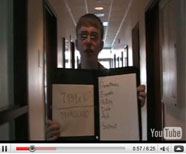 In an attempt to monetise YouTube, their owner Google has decided to allow longer videos to be uploaded to the site, including full-length episodes and films.

Don’t get too carried away looking up the latest Indiana Jones flick just yet, as only selected companies have been allowed to break the current 10-minutes length criteria so far. The recent release of an episode of the TV show The Tudors is an example of what will be uploaded under these new rules, with money obviously swapping hands somewhere along the way.

The site is facing stiff competition from the likes of Hulu, Joost, Babelgum and even UGC sites such as Seesmic, Ustream and Justin.tv, so YouTube’s change of heart is bound to open up a lot of doors for the company. Perhaps this will finally allow Sergey and Larry to cash in on their rather large purchase which until now, has failed to bring in the revenue. Could we be seeing full-length TV episodes and films debuting on YouTube shortly? Civilians such as you and I allowed to upload longer videos, albeit for an annual membership fee? Whatever will be decided, Larry and Sergey are bound to be sportin’ some extra-shiny watches in the near future.