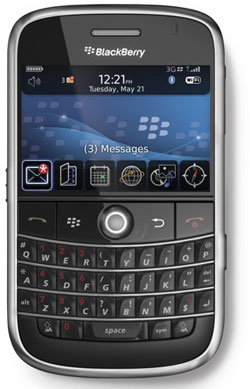 Well, we’ve been banging on about it for a few weeks now, even showing you an unofficial video on the handset in action – but now the BlackBerry 9000 has gone official, with PC Mag getting the RIM-sponsored scoop.

The new 4.6 OS will actually appear in a range of devices, looking not unlike the 8800, Curve and Pearl – the 9000 specifically will look like a slimline 8800. Specs include connectivity up to HSDPA, a 480 x 320 display, 624-Mhz Marvell Tavor PXA930 processor, Wi-Fi, GPS, 1GB of on-bard storage, support for up to 16GB microSD cards, Bluetooth, 480 x 320 video recording, photo geotagging and web browsing which may ‘support rich media’ in the future. No touch screen either, should you think it’s an essential in 2008.

The BlackBerry Bold 9000 should be available this summer, though the price has not yet been made known.