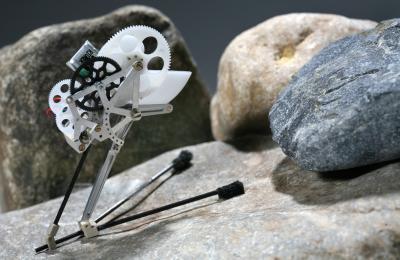 This isn’t the world’s smallest robot but it’s far more interesting than a pair of tweezers, if a little more frightening.

“What could be frightening about a little grasshopper robot?” you say. “So they’ve invented a 7g bot that can jump 27 times its own size to a height of 1.4m. That’s just cute.”

Well, sort of but imagine a swarm of the little relentless buggers flying at you like an unstoppable, single-minded plague of locusts, because that’s what its creators have in mind – to use the grasshopper robot on mass to explore and send back data from unreachable and tough-terrain landscapes.

Laboratory of Intelligent Systems has used the principles of the storage of elastic energy found in the animal kingdom – with fleas and frogs and other great leapers – and applied them to two torsion springs which are charged by a miniature 0.6g cam motor.

The robot can leap 320 times at intervals of three seconds with the current battery but the plan is to fit tiny solar cells for theoretically unlimited range.

It’s all very useful stuff but it does feel a little Terminator 3 meets Jurassic Park II if you know what I mean. Being overwhelmed by an army of mini creatures puncturing holes in my skin is the stuff of nightmares. Let’s hope the military don’t invent any 0.6g rocket launchers for them .