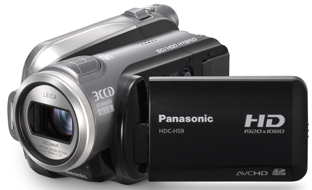 Panasonic today announced four new camcorders in the UK, two to join their high-def range, the other two to languish in the inferior standard definition range. Standard def, bah! Who wants it?

The two full-HD camcorders announced are the HDC-HS9 (pictured above) and HDC-SD9. Offering 1920 x 1080p recording, at 25fps and a 17Mbps bit rate, it features a 60GB hard disk, but you can also record onto SD or SDHC via the card slot. Oh, and did I mention it’s got an impressive 10x optical zoom too? That’s the best part, if you ask me.

Face detection along with an Intelligent Shooting Guide are also featured, the latter giving you handy tips on how to improve your filming, by displaying hints on the screen. This can, of course, be turned off.

With an advanced Optical Image Stabliser (OIS), it has a Leica Dicomar lens and records onto the AVCHD video format. A new feature for Panasonic camcorders, it features a 5.1-channel surround sound system with five microphones, so when playing back on your home cinema set-up, you should be impressed with the sound from your filming surrounding you naturally.

Yet another new feature for Panasonic camcorders, the HS9 also features a Pre-Rec mode, which continuously records three seconds of images into an internal buffer memory, so when pressing the ‘record’ button manually, it adds the three seconds filmed to your new video clip.

No word on pricing or availability, as yet.