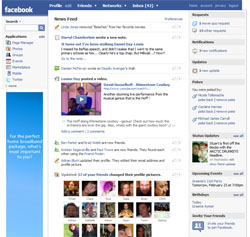 Earlier this week, it was reported that Facebook saw its visitors fall in January for the first time in 17 months. Has the bubble burst for the social network? UGC site Qype reckons it might have.

The site is currently bagging more than 2.2 million users a month, posting reviews and recommendations. Apparently it signed up more than five times as many users in January as it did in December, while Facebook saw its figures fall.

“It’s easy to see that people have been experiencing a Facebook brick wall recently,” says Qype’s UK community manager Rob Hinchcliffe. “They’ve added their friends, found their exes and played Scrabble, and then it just becomes an endless loop of group spam and pointless pokes.”

He goes on: “What we’re seeing now is people searching for a new network that can give them some genuinely useful information and some kind of practical application. These are the socially useful networks that revolve around comparatively niche interests and are thankfully free of virtual zombies and the like.”

However, I can’t help thinking it’s not an either/or situation. A good way for these ‘socially useful networks’ to grow is by piggybacking on the huge userbases of sites like Facebook, particularly since it opened up for other people’s applications. And, indeed, Qype has its own Facebook application to capitalise on just this.

So rather than killing Facebook, Qype and other sites/services could actually help it hold on to users, since they’ll be able to keep track of all their niche interest services from one place.

Related posts
Shazam music discovery site launches Facebook application
Yahoo oneConnect is excellent, but will Microsoft and Facebook derail it?
Facebook to limit how many invitations users get. No more spam?