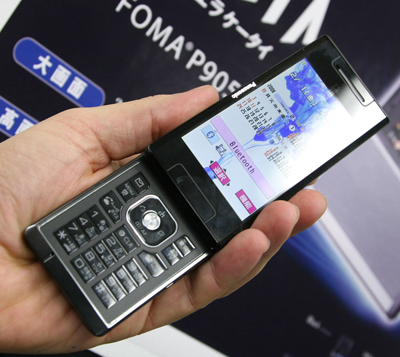 Nowadays, it’s the done thing for big consumer electronics firms to take their home entertainment brands mobile, with dedicated handsets. Think Sony Ericsson with its Walkman, Cyber-shot and (in Japan) Bravia phones. Panasonic is at it too, with its Viera TV brand.

Meet the P905i, which has just been launched by Japanese operator NTT DoCoMo. It’s a 3G phone with a 3.5-inch screen and an impressive 854×480-pixel resolution, as well as GPS and 1GB of built-in memory. Oh, and a 1seg digital TV tuner, with that sizeable onboard memory being used to record shows.

I’d love to speculate about this kind of phone coming to the UK, but really, it hardly seems worth it until we get some form of mobile-friendly digital television standard here. So in the meantime, we’ll just have to dribble over what those lucky Japanese mobile users are getting instead. Bah.