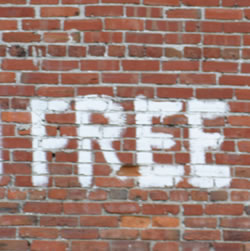 It was Janet Jackson and Luther Vandross who sang about the best things in life being free, although I doubt they’d have been so chirpy about it if they’d known that within years, millions of people would be merrily downloading their music from Napster.

For a long time now, ‘free’ has generally meant ‘illegal’ when it comes to entertainment, and particularly online, as a generation emerged who expected to get all their music, movies, software and TV shows for free off the internet. Yet the last year has seen that change, with all manner of companies looking to offer entertainment for free, but legally, often funded by advertising.

The early attempts have been variable, particularly when it comes to music, but it seems entertainment firms have finally got the message: if they can’t make us consumers pay for their content, perhaps they should be trying alternative business models.

Start with music, and firms like SpiralFrog, Qtrax, and We7 – to name but three. All start from a similar premise: free music, with advertising around it ensuring that the record labels, music publishers and artists get their dues. They differ in their approaches and the nature of the advertising, but the basic concept is the same.

From a fan’s viewpoint, it seems like an acceptable trade-off – free music in return for seeing some ads. However, there are questions around how well it will work. For example, models relying on you seeing ads while you download songs fall down if you simply switch browser windows while that’s happening. Meanwhile, it’s unclear if tagging adverts onto tracks won’t be seen as overly intrusive by listeners.

Oh, and Qtrax had the launch disaster to end all launch disasters, giving the impression that it had signed up all the major labels, before one by one, they all confirmed that, er, it hadn’t. However, We7 has been more successful, notching up 100,000 registered users and more than two million downloads, while SpiralFrog has more than 500,000 registered users, after an unpromising start with launch delays.

Free music could have a future then, but it’s early days. Meanwhile, there’s a host of non-download ad-funded music services springing up online too, letting you stream music for free with adverts in and around it.

That’s music, then. What about games? I’m not talking console, but other platforms. Take PC-based MMOGs, for example, which have traditionally used a monthly subscription model – as you’ll know if you’re a World of Warcraft player. But that’s changing, as MMOG publishers try to expand their number of players by offering free-to-play games.

Advertising isn’t the key factor here to ensure they still make money, mind. You just pay for other things, like micropayments for in-game items. Again, it’s cool to be able to try such games for free, but less cool if this model means you have to spend a lot of money to compete with the best players. That’s a problem for developers to solve.

Meanwhile, the mobile games industry is testing out the idea of free games funded by advertising (head to GameJump and download Tower Bloxx if you want a mobile treat), while online, the emerging crop of Facebook and social games are following a similar ‘free funded by ads’ model.

Then there’s TV, with services like the BBC’s iPlayer in the UK, and Hulu in the US, giving free access to commercial shows. Quite how this sits alongside the separate markets of subscription-based digital channels, and standalone downloads on iTunes, remains to be seen.

And films? Well, nobody’s cracked that nut yet, of offering movies for free and funded by advertising. But you can bet several people will be trying in the next couple of years. Free entertainment is clearly here to stay, assuming the business models can be worked out. And best of all, you’re in far less danger of gettign your arse sued for enjoying it…