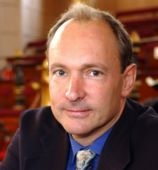 The widely acknowledged founder of the World Wide Web, Tim Berners-Lee, has been named as the most influential person in technology over the past 150 years for his impact on society and groundbreaking technology.

Intel invited a panel of experts to vote on the world’s 45 most influential technologists, and came up with some interesting results.

Following Sir Tim come the two founders of Google, Sergey Brin and Larry Page, in second and third places. In fourth place is Gugilelmo Marconi, inventor of the radiotelegraph system, and in fifth place, Jack Kilby, inventor of the integrated circuit and calculator.

In sixth and eighth places are the two cofounders of Intel, Gordon Moore and Robert Noyce, politely sandwiching Alan Turing, in seventh, who played a major role in deciphering German code during World War II.

William Shockley, co-inventor of the transistor, made it to ninth place, while Don Estridge, lead dveloper of the IBM computer, rounded out the top ten.

The 45 are listed at the end of the article, but what’s really interesting — in the interests of petty point-scoring at least — is that Steve Jobs in 14th place trounces Bill Gates in 31st place. Ahh, the satisfaction.

Perhaps it’s not surprising that, given the 150 year range, rising stars such as the creators of well-known entities such as Facebook, MySpace, and Second Life, don’t figure — yet. Give it a few years, though.
The 45 most influential people in technology: