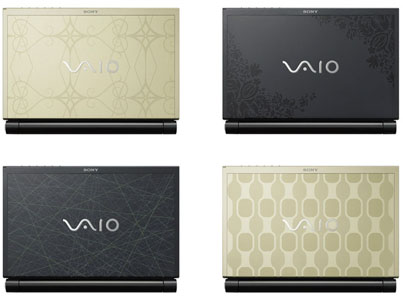 I may’ve been slightly critical of Sony Vaios in the past, but these new Series T notebooks may be enough to make me change my mind. I’m such a sucker for graphic covers on products.

Sony’s updated a couple of other lines too, but none are as gorgeous as the Series T models. There’s a new 17″ Series A notebook, with a Penryn chip, up to 4GB of RAM, plus terrestrial digital TV tuner. The ‘Living’ TP1 PC has also been updated, with a Core 2 Duo T8100 CPU, Blu-ray burner and a couple of other minor details.

It appears all these updated models will be available from early February in Japan, so with luck the rest of the world will be able to grab some of those eye-catching T models soon.