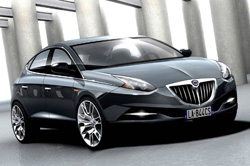 The hype around virtual world Second Life has died down a bit in recent months, and some companies have shut down their branded zones within it after visitor numbers didn’t match up to the press column inches when they launched. However, by contrast other brands are coming into Second Life.

Such as? Lancia, that’s who. The carmaker is opening its ‘Lancia Village’ island in Second Life tonight, which will offer a virtual showroom, a cafe, and even a multiplex cinema. Oh, and a big glass bubble to hold parties inside – an essential element. Visitors will be able to enter competitions by uploading photos and videos of their own Lancias too.

But Lancia has even more ambitious plans for its new virtual presence, planning to show off its new Delta car on Lancia Village the day before it’s unveiled in the real world, at the Geneva Motor Show in March. That’s not it in the photo, obviously. It hasn’t been unveiled yet..