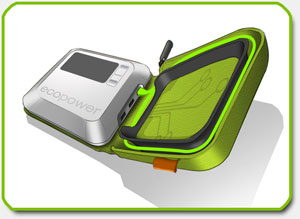 Over the last few weeks much of the speculation surrounding CES 2008 has been that it will be the first in which consumer electronics companies start to parade green products. Well judging by what happened yesterday when the major makers all held their press conferences very little has changed.

The big news was that Sony, Panasonic and other makers announced a joint campaign to recycle gadgets. While we heartily cheer the news it means very little to UK consumers as 1 it is US only. 2 In Europe we have the fantastically named WEEE directive which in theory does the same thing.

So it was left to some of the CES B listers to make the running with news about their environmentally friendly stuff.

Here’s a quick round up.

Green plug – This is a way cool idea. It involves trying to persuade manufacturers to form a coalition to agree on the company’s universal low-energy USB charger. This doesn’t just sound great for the environment, it sounds bloody sensible too. Watch out for the vid showing the plug in action later on Monday.

Eton – Best known in the UK for making rather stylish hand cranked radios, Eton went one better at CES and has announced the Survival Radio the FR100. It has AM/FM/2-Way GMRS radio capabilities, a torch, emergency siren and mobile phone charger, though I suspect the latter will take a lot of arm work to get going.

Nokia – At CES Nokia is talking up its Eco Sensor range of technologies. These include recycling initiatives and a drive for more environmentally friend packaging. However the interesting part is that Nokia talks of looking at ways that mobile technology could employ mobile sensing to monitor and report on both the health of the user and the surrounding environmental conditions. So I am guessing if you start feeling a little queasy because of high levels of radiation in the atmosphere your phone will let you know about it.

Marvell – The company might be as high profile as some of its rivals, but Marvell is doing some sterling work behind the scenes in developing low power video processing, computing lighting and Wi-Fi technologies.