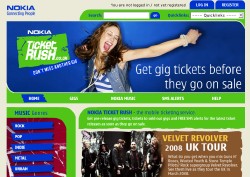 Nokia’s Ticket Rush service is closing its doors on 3rd January, with users being offered new accounts with Nokia’s partner Live Nation instead. Ticket Rush launched in 2006, and offers pre-release tickets and tickets to sold-out gigs, as well as SMS alerts when tickets go on sale.

It launched in 2006, with bullish claims from Nokia that the mobile tickets sold through Ticket Rush could help kill off traditional ticket touts. At the time, Nokia’s Simon Lloyd said the next move for the site would be “one seamless transaction on the mobile”, paying for tickets from your phone too.

Instead, the site is being quietly shut, with the news delivered in an email to subscribers today. “All outstanding ticket purchases will be honoured, and your transaction with Ticketmaster will be processed in the normal way.” This is the UK site – it’s unclear whether the more recently launched US Ticket Rush site is also closing.

The full text of the email is below the jump.

On 3rd January 2008 Nokia Ticket Rush will be closing. As this is the final Nokia Ticket Rush e-newsletter you’ll receive, we just wanted to say a massive thank you for using our service over the past 2 years. We really hope you’ve found it useful and have enjoyed some great gigs.

The shows go on…
Nokia’s live music partner Live Nation will continue to offer great gig tickets and merchandise which you can access at LiveNation.co.uk. To ensure that you don’t miss out on a single gig, an account has been set up for you at LiveNation.co.uk. An activation email will be hitting your inbox in the new year.

All outstanding ticket purchases will be honoured, and your transaction with Ticketmaster will be processed in the normal way. If however, you have any residual concerns, please do email our customer services at [email protected]

Don’t forget to visit the Nokia Music Store. You can browse, stream and download over 2 millions tracks at music.nokia.co.uk.

We hope you have enjoyed Nokia Ticket Rush as much as we have,