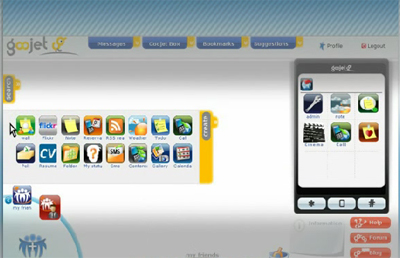 So, after that long preamble from the judging panel, the winners were announced at lightning speed, leaving us desperately scrabbling around trying to work out how to spell half of the winners. So, without any more preamble from me, here are the winners:

Runners up
Erepublik – Massive online strategy game.
Split Games – Network of gamers. Share reviews and games. “We give the gamers everything they need.”

Meanwhile, Ashley sat in on the actual pitching, so click over the jump for his report…

Hi it is Ashley. I am also over at Le Web 3. But while Katie and Chris get to hang out with web superstars like Kevin Rose and Brent Hoberman over in the main hall (starf***ers the pair of them), I am checking out the Pop Idol for Web 2.0 types known here as the Start up Competition. Over 30 new web companies are presenting today and they get seven minutes each to get their message across. There’s some good stuff delivered by some very passionate and knowledgeable individuals too, as well as a few net dogs.

First up (for me anyway) is Christina from walk 2 web. Judging by the accent I guess she is eastern European. She’s talking about her site which is aimed at the type of person who likes jumping from one site to another in a random, let’s wander through the web kind of way.

It is a clever social bookmaking type site that’s a little bit Stumble, a little bit Digg and a little bit unique. On the home page you are presented with a series of thumbnails that are links to a subject you are interested in. You click on the thumbnail and the link is blown up on the page. You get RSS options too. So you can wander through ten sites without ever leaving the page.

Now it is Floobs, a Finnish start up which is all about people sharing live video clips. They are calling it Live Mobile Television – now this is more like it. There are plenty of sites looking at this space – Ustream etc – and the prizes for who gets it right could be huge.

They are saying that uploading live video to your own TV channels should be as simple as uploading images to Flickr etc. Floobs is apparently big on social networking too and will work with Facebook, MySpace etc. Floobs will also works as portal where people can find live TV channels too.

Aaah here’s the clever bit. Apparently Floobs competitors are focusing on the web whereas Floob is are much more focused on mobile.

The other big USP is that Floob is multi cultural and multi lingual. Beta codes go out within two weeks- and in early spring different language versions will follow.

So far only it is only available in pilot mode in Finnish. Apparently people have been using the site for streaming live hockey games, videoing church services, and watching a cat that lives in a refrigerator – no really. The revenue model is mainly advertising based – surprise surprise. They are also looking at pay per view content too.

I am going to keep my eye on this lot.

Scopas TV is next up. It is a German web based company and I get the feeling that this is a TV production outfit looking for some web action.

Yep, I got it right. The new company is providing TV especially for the web.

Here we go with a short video. They have a clip of Wallace and Grommit style version of the German football team in London. It is supposed to be funny. Well let’s just say it didn’t translate

They are saying all the right things though. We want to create video for the web not adapt when we have already in the library. They see their competition as Aardman – Wallace and Gromit basically, the difference is they are going to focus on sports comedy.

Here’s the clever bit, apparently they have a way in which they can create figures of stars like David Beckham, and not pay them royalties. Do his lawyers know? They are talking about the distribution network for the vids now. Apparently they are going to be available via websites, iTunes and other places.

Check out our other posts from the show in the Le Web 3 category.