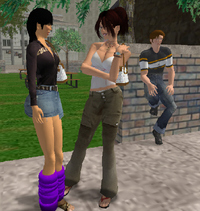 At the start of 2007, we were in the midst of Second Life mania in the media, with newspapers and cultural commentators queuing up to rave about the virtual zeitgeist. Meanwhile, brands were piling into Linden Lab’s world, hoping to share in the euphoria.

It’s fair to say that hype has now dissipated. Many brands have been disappointed with the return on their investment in Second Life, and user numbers haven’t grown as fast as was expected. That’s not a sign that Second Life is a flop, mind. It’s just more of a niche than some of the overblown hype predicted.

However, some virtual worlds have seen huge growth in 2007. They’re the ones aimed at kids, for example Club Penguin and Webkinz. They’re not hyped much, but talk to parents, and you’ll realise how popular they are. So before you say virtual worlds failed in 2007, won’t you please think of the children…

Check our other 2007 In Review posts by clicking here