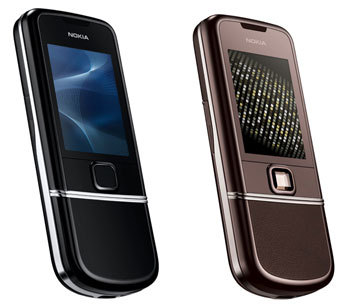 Two newly-launched premium handsets from Nokia – the 8800 Arte and 8800 Sapphire Arte, aimed at the ‘discerning and style-conscious consumer’ apparently.

Both are 3G handsets, with 2.0-inch OLED display with up to 16 million colours, 3.2 megapixel auto focus camera with 8x digital zoom, 1GB built in memory space, a MicroUSB all-in-one-connector and an anti-fingerprint coating on the metal and glass.

But you guess looks are more important than specification here, with Nokia highlighting the ‘quality’ and ‘craftsmanship’, which includes a seamless metal and glass body, glide opening mechanism and an analogue clock that only appears when you tap the phone. The Sapphire Arte goes a step further by adding a genuine sapphire gem stone and some leather to the finish. They also come packed with a package of accessories and ‘an exclusive videotrack and soundtrack composed by Kruder & Dorfmeister with visuals by Fritz Fitzke’. If you happen to be familiar with said individuals..