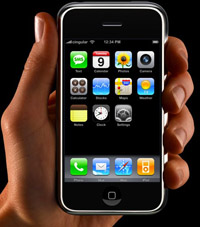 So, it’s the morning after the three nights before. iPhone went on sale in the UK on Friday at 6.02pm – a slightly baffling choice of time bearing in mind that Germans could buy the device 18 hours earlier. But a common theme of reports since has been the idea that the launch was a flop, because queues weren’t as huge as expected.

The Register has an article summing it up, headlined ‘Tumbleweeds outnumber punters, as iPhone’s first night flops’, reporting that in many stores around the country, punters were outnumbered by staff. Other reports have described the launch as “good but not spectacular”, “lackluster” and a “manufactured, swaggering consume-fest”.

Retailer Dial-a-Phone (which isn’t selling iPhones) posted a cheeky montage of empty pavements outside rival chain Carphone Warehouse (which is), whilc PC Advisor reports on an embarrassing computer failure in the first hour on sale.

Thing is, I’m not so sure that a disappointing launch day means the iPhone has been a flop, for several reasons. First, there was no way it could live up to the hype of the US launch earlier this year, which was the first time any consumers could get their hands on Apple’s handset. Indeed, many of the keenest early adopters here in the UK may well have bagged a US iPhone and unlocked it, rather than waited until Friday for a legit UK model.

Second, those of us who weren’t quite that keen would still have learned our lesson from the US launch, where despite the lengthy queues and pre-launch hoopla, there were still piles of iPhones on sale once the rush had subsided.

Unlike the game console world, where launch shortages seem to be part of the manufacturers’ marketing strategies, there were enough iPhones to go round at the US launch – so a lot of us Brits figured the same would be true here on Friday. Why queue up in the rain on a Friday night, when you could go to the pub instead, then pop into Carphone Warehouse over the weekend?

Third: well, iPhone’s success in the UK won’t be judged by its first-day sales (it’s just been reported that O2 had 8,000 iPhone activations on Friday, although this isn’t an official announcement). The true judgement will come in how many iPhones are sold by Christmas – and before you accuse me of being a fanboy trying to argue away Apple’s failure, this principle is as much about debunking wildly high ‘launch weekend’ forecasts.

So yes, there were less queues than expected on Friday, and probably more salesmen kicking their heels than O2 and Carphone Warehouse had hoped. But to scream ‘FLOP!’ this quickly feels premature, to say the least.

And for more iPhone stories, check out our iPhonic blog!