Erm, if you didn’t know, there’s some sporting thing happening tomorrow. The final of a rugby tournament I think it is, in Paris in France. Only joking, it’s the Rugby World Cup Final tomorrow with Jonny Wilkinson leading our brave boys in the fight against South Africa to hold onto the trophy. COME ON!!

But just in case they need some help off-the-field, here’s some technology that might give them a gee-up before the crucial tie. 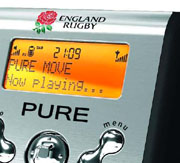 PURE MOVE DAB RADIO
What a great endorsement this is! Not only do Pure make fantastic radios, this one has the England colours all over it. It was specially made for the tournament and has the little rose logo just above the display. It runs for 40 hours on the battery, does textSCAN for reading facts about what’s playing, and there’s an audio in for your MP3 player.

And if you wait until next week to buy it, it’s bound to come down in price from £89.99 now that the tournament is over! 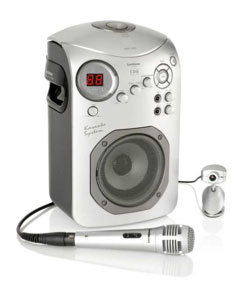 GOODMANS PORTABLE KARAOKE
If the rumours are to be believed, the England team like a spot of singing. We all know about Swing Low Sweet Chariot, that famous rugby song, but they have also been using Kenny Rogers’ hit The Gambler to spur them on in the dressing room.

What makes this machine great though for the final after-party is it has a little camera that records your singing and dancing. So the lads can play it back and take the mick out of each other.

It’s only £69.99 and at least it’ll give them the opportunity to brush up on their tunes ahead of one of them starring on Celebrity Fame Academy! 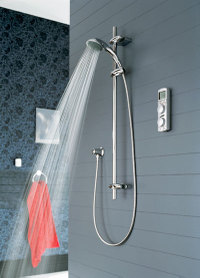 You’re aching, you’re muddy, you’re so stressed that every muscle in your body has tightened up. Yes, even there! What better way to relax after a big rugby match than in the shower. Team baths are so last year!

And this one is perfect for any rich rugger star, it’s a wireless system that can be switched on and off from any room in the house – so you can turn it on and get the temperature up without leaving your bed. Water great idea!

It can even be programmed with different temperatures and powers for different people – meaning every one of the side can have their own setting. Not that any of them would want it anything but hard and pounding I am sure!

ANYTHING BRANDED BY O2

Talk about backing a winning horse! When O2 announced a new sponsorship deal for four years with the England team, I bet they didn’t think they would get to the final. Now it looks like money exceedingly well-spent.

So that’s got to mean free phones for every squad member surely, plus free calls for life?! After all, they are going to use up a lot of minutes after the match tomorrow calling their friends in celebration!!

RUGBY 08
What better way to get in some practice than with this computer game based on the tournament. Jonny Wilkinson can go over his kicking and
ensure he’s always hitting the target, after last week against France, he could do with a spot of training.

And should the worst happen and England lose tomorrow (don’t even think it!), at least they can then replay the final and turn the South Africans over virtually if not for real!

Don’t miss all the rugby latest on our excellent Scrumbag blog!!