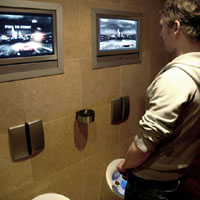 This is the Piss Screen. Excuse our language, mother, but that’s what the German makers are calling the thing.

It’s made up of a little pressure pad in the urinal, which a gentleman can use to control the action on a screen above. Imagine weeing on a Nintendo DS to get a general idea. Perhaps that’s how a drunk German came up with it in the first place?

Initially created with a little racing game inside, the idea is to encourage drunks to not attempt driving home and to take a taxi instead.