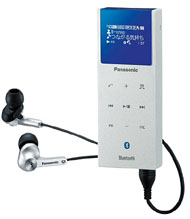 Look at that. What a lovely screen. So futuristic and nice.

Panasonic’s D-Snap player itself has seen a bit of a feature update to bring it up to late-2007 levels, with the SV-SD950N now coming with Bluetooth for (painfully slowly) transferring your tunes across. Then there’s the usual stuff – takes cheap old SD cards, plays AAC, WMA and MP3 files, plus it comes in a range of fancy colours. Black. And white.

It’s basically yet another fairly boring little MP3 player, but it has the sort of screen you’ll want to show to people, particularly girls, so they think you’ve got lots of money and have all the “cool stuff”.