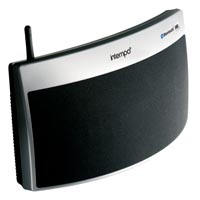 Intempo Digital has gained a reputation for producing solidly built, mid-priced gadgets that pack popular technology into a simple, user-friendly exterior. I can see anyone’s parents or technophobe friends being attracted by the smooth, almost retro simplicity of this Bluetooth speaker.

It’s not compact or ultra-exciting in its design, but it won’t look out of place in any living room, bedroom or kitchen. More importantly it’s easy to use and produces reasonable small-scale sound quality. We used it mainly with a Bluetooth-enabled mobile phone and found that once the phone had picked up the device it was a matter of something like four button presses to get the music going (and obviously that will depend on the device you’re streaming).

Getting the phone to initially recognise the device took a bit of perseverance and dangling it near the antenna but this was probably a fault of the phone’s; when I tried it with a different handset all was well. Incidentally, a dongle add-on to allow iPod streaming is apparently forthcoming later in the year so if like me you keep the majority of your tunes on an Apple device all is not lost.

It’s Bluetooth v 1.2 compatible, by the way, and the range is a (tested and confirmed) ten metres. There’s a 3.5mm jack as well, so that if for some reason Bluetooth is letting you down (or if you don’t have a Bluetooth device handy at the time) you can still use it as a normal speaker. The promise of being completely wireless is slightly let down by the fact that this cannot be battery powered but is mains-dependent, but the design is clearly not intended for outdoor or portable use. Since it also weighs 1.2kg it’s probably too bulky to carry around anyway.

The audio output power isn’t earthshattering at 2 x 5 watts – it actually comprises of two 2″ speakers inside the main body – but for a small room it’s reasonably clear and crisp, controlled by the scrolling volume wheel on the side. For a closer look at the device itself and the chance to hear the sound quality, take a look at my video review.