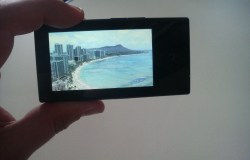 Just landed at IFA, a day after everyone else admittedly, but I get to stay longer so while they will be sleeping off their hangovers I’ll be combing the halls for those weird and wacky stuff.

For now though I am with Samsung and Anthony Marsella (UK and Ireland’s Chief Marketing Officer) who is giving an overview of where Samsung is in the UK and Europe and what the key products they have at IFA. So read on for more on new HD flash memory cam, MP3 players, new LCD TVs.

All makers talk about how big they are getting etc (insert huge pinch of virtual salt), but Samsung is claiming some pretty impressive stuff. According to Anthony Marsella on information from research company GFK, Samsung is now the number one CE brand in the UK and also top in TV and set top boxes. In TV Samsung says it is number one in LCD and is now number two in plasma. The UK is apparently the biggest market for Samsung outside of Korea. It also claims to be number one in Europe as a whole too.

Samsung has a tradition of delivering loads of world firsts at exhibitions (some of which are usually more marketing flannel than real innovation) and this IFA appears to be no different.

Its highlights include six world firsts, more wireless, including better use of Bluetooth, and more uniform interfaces. Samsung says it is all driven by what consumers want – but hey they would say that wouldn’t they…

Samsung also says that there is a lot of work going on in Korea linking up the internet to the TV. This is apparently coming to the UK next year. It will deliver information via the kind of widgets that Vista has in other words news snippets, weather etc in boxes that sit in the corner of your TV screen.

Other innovations include more LED technology, 3D and laser breakthroughs which it is looking to bring to the market over the next three years. Marsella says high definition isn’t the end of the road there is still a lot of new tech stuff coming through.

There’s also the F9 TV which has LED smart lighting. It works by locally dimming LEDs to improve contract ratios – 500,000-1 apparently which delivers a very sharp picture. Its other big plus is that it is 30% more energy efficient than previous Samsung LCD tellies.

Samsung also has its Blu-ray/HD DVD dual format player which it claims is a world’s first – its LG rival isn’t compatible with all HD DVD’s interactive and audio features.

Another, ahem, world first is the HT-BD2 – which combines Blu-ray and audio in a home cinema system. It 1100watts, 7.1 channel audio output, slim design etc.

Perhaps the most exciting gadget Samsung has is the VP-HMX10 – a very skinny HD camcorder which uses flash memory to store footage. It has quick start in three seconds, battery life of two hours, 720p output at 50 fps and up to 8 Gigabytes of internal memory. A 1080p version is coming next year. It is due to launch in November priced at around £499.

Lastly Samsung has a new MP3 which looks more like a handheld TV than anything else. It is called the YP-P2, is capable of delivering 30 fps on a three inch widescreen. Also has radio, touch screen, 35 hours of playback.

There’s also the YP-T10 which includes an animated user interface and has Bluetooth on board. Completing the set is the YP-S5, the next gen of the K5. Like its predecessor it includes speakers but is much thinner and features MPEG4 video playback.