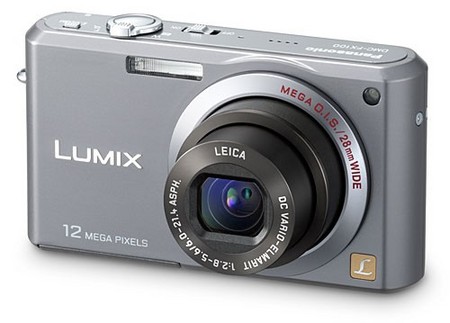 Panasonic has announced their DMC-FX100, the latest addition to their Lumix range of compact digital cameras.

The zoom ratio can be extended up to 7x in 3-megapixel resolution mode with minimal deterioration thanks to the Extra Optical Zoom.

The 12.2 megapixel sensor means that images up to A2 size can be printed.

The DMC-FX100 features a 0.009 second shutter release time lag, and shutter interval as short as 0.9 seconds. It can also shoot at two frames per second in burst mode. It can also be used to shoot 1280 x 720 high definition content at 15fps.

Unusually for a compact, it features some advanced auto-focus metering, including 1-point, 3-point, 9-point, and spot.

It comes with 27MB of built-in memory, a 2.5 inch LCD, styled in either silver or black.

The camera will be launched from July, price to be confirmed.

It will be interesting to see how well this camera performs with all those extra megapixels, because simply upping that count doesn’t necessarily produce a better camera, and while some of the specs sound good on paper, I’ve a feeling consumers who merely look at that big “12 megapixels” label on the camera’s shiny body could be disappointed.