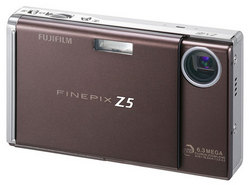 Fujifilm’s ultra-slim digital camera, the FinePix Z5fd, has picked up a gong – the Technical Image Press Association (TIPA) voted it the Best Ultra Compact Digital Camera at the TIPA Awards 2007.

Hayley Buery, Fujifilm PR Manager, says: “This is the second time in as many
years that one of Fujifilm’s digital compact cameras has won this coveted
TIPA award. Hot on the heels of last year’s award for the FinePix F30, the recognition of the FinePix Z5fd compact is further proof of the commitment Fujifilm makes to consumers by putting cutting edge technology in pocket-sized cameras, especially the stylish Z range.”

The Awards Ceremony will take place on 31st May 2007 at the Congress Center
of the KölnMesse, Cologne.