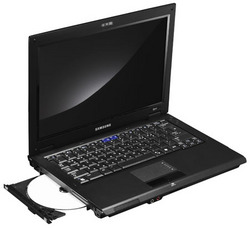 Both of the notebooks feature Intel Core 2 Duo processors, as well as up to 2GB of 667MHz DDR 2 memory, Bluetooth 2.0, Wi-Fi, a six-in-one memory card reader and the company’s AVS system, which allows access to media content stored on the machine without booting. They also feature a case that contains particles of silver in the keyboard and palm rest, which prevents bacteria build-up. Nice.

Specific to the Q45 is a 12.1-inch, 1280 x 800 display driven by an as-yet-unannounced integrated Intel graphics core and HSDPA connectivity. The R70 has a 15.4-inch display and an Nvidia GeForce 8000M – which Nvidia has yet to formally announce.

The R70 is expected on sale from May, the Q45 a short time later. No pricing as yet.