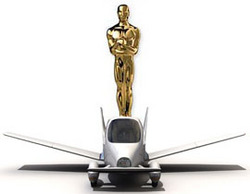 This weekend sees Hollywood don its gladrags for the 79th Academy Awards. Will Helen Mirren scoop a prize for The Queen? Can Martin Scorsese finally get his Oscar? And more importantly, can someone nick us one of the backstage goodie bags? Cheers.

Anyway, as Oscars-fever mounts, I got to thinking. What if they were to hold an Oscars purely for achievements in big-screen gadgetry? Instead of relegating all things techy to a single special effects award, put the gizmos centre stage! Well, screen. Here’s a few suggestions for categories, and we want YOU to help pick the winners.

1. Most Gratuitous Gadget Product Placement. Note, Casino Royale is as much a shoe-in for this award as Mirren is for the Best Actress category in the real world.

2. Most iPoddable Soundtrack. Which film had the best choons this year? Which considering Dreamgirls has three of the five Best Song nominations in the real Oscars, and the Crazy Frog bio-pic has yet to be released, should be an easy choice.

3. Achievement in HD-worthy Explosions. This is the proper award for special effects. Meaty fireballs are the reason we bought our HD tellies. Well, that and the football. If someone contrives an enormous explosion in a football movie, they win this gong by default.

4. Best Futuristic Film Gadget. Blinding laser guns! Flying cars! Any screen that works by you waving your hands about! Hollywood employs legions of futurologists to come up with this stuff, so the least we can do is celebrate their ability to nick ideas from Wired and old sci-fi novellas imagination.

5. Worst Adapted Gameplay. You know, movies based on console games. Pish, every last one of ’em. But which has been the worst this year? And was it made by someone other than Uwe Boll?

6. Most Web 2.0 Movie Website. Note: this means more than a couple of teaser trailers and a character guide.

7. Most In Need Of A Mid-Film Invasion of Killer Robots. An award category specifically for unfunny romcoms, drawn-out documentaries, or bum-numbingly dull meditations on life, which could only benefit from large doses of cyborg-dealt death and destruction. Automatically awarded to any new Jane Austen adaptation.

8. Most Photoshopped Poster. Those canny graphical design whizzkids. They shave centimetres off inner thighs, give comedy film pets cheeky grins, and make ladies believe Owen Wilson is a sexpot. We should celebrate their ingenuity.

9. Best Supporting Scientologist. The only category to be awarded based on purely mathematical calculations. By which I mean (a x b) + c, where a is ‘money donated’, b is ‘fellow celebrities recruited’, and c is ‘chat-show sofas destroyed’.

10. Lifetime Achievement for Services to Movie Gadgetry. The person or object that’s been synonymous with film gizmos for years. George Lucas wins every year for the light-sabre, obviously.

That’s the categories, so what do YOU think? All nominations are welcome: we can’t promise we’ll have a ceremony as glitzy as the proper Oscars (or, indeed, this week’s Shiny Media Awards, which are the Oscars Of The Gadget Industry, kind of). But it’s still worth placing your vote.